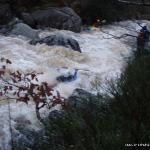 There is almost nothing of note in Kilcullen and Ballymore Eustace, and the first weir proper on the Liffey is in Athgarvan. There is another in Newbridge and then one at Newbridge College. An old Weir exists at Morristown Lattin and small broken weirs at Millicent and Clane. Overall an astonishingly dull 30 miles or more, but its nice for touring. Then we encounter Straffan, at this point the Liffey adopts a whole new character, fast flowing weirs, all with their own personalities and intricacies.

The overall run is fairly straightforward, flat stretches with grade two weirs. Extra care should be taken on high levels, weirs can be more retentive and large stoppers can appear.

There are several put-ins, the most well known is probably at the Sluice or upstream of Lucan Weir.

Straffan
This is the put in for the Liffey Descent . From the R403, take the sign for Straffan at Barberstown Castle.

Temple Mills
There is quite a nice get in point just below Temple Mills and above Vanessa. Take the R403 from Celbridge towards Clane. About 600m from the centre of the village is a long bend in the road. Just after this take the left turn into Abbey Farm Housing Estate. Take the second or third turn left in the estate (third turn gets you closer to Temple Mills, the second to Vanessa) and these bring you to open ground which you cross to enter/exit the river. Just be careful there are a lot of trees.

Salmon Leap
This is the start for the Junior Liffey Descent. (Throughout the year, this is a private clubhouse, so access may be an issue.) The clubhouse is located in Leixlip Village.

Sluice
As you enter Lucan from the M4, there is a carpark just across the road from Mc Donalds. From here you can park your car and walk to the river.

Lucan
Coming from Lucan, drive through the village and over the Liffey Bridge. Take the immediate left turn after the bridge. Continue on for a few hundred metres or so until you come to a bad bend in the road. There is parking space enough here for a few cars.

The main take-out used is Strawberry Hall, along the Strawberry Beds Road. You can park in the car park across the road from the pub. There's a slip going up from the river to carry your boat up. The Wrens Nest pub can also be used. You can take out just at the Wrens Nest weir and walk along the track to the road.

Straffan Weir
Straffan, as its know, is a large left facing 12 foot weir with four fish tanks and chute on river left, large quite rocky and ridged main face and tight near vertical drop on the far right. The weir can be inspected from the bridge just beyond the K- Club. The easiest line is normally river right.

Straffan can be shot in many places. On the left there is a good challenging shoot through the four fish tanks. Alternatively there is a shoot immediately to the right of the tanks, which is like a large tongue of water between the weir and the tanks. You can shoot over the centre (K boats beware) but it is stony and a small ridge can cause issues in anything but really high water and then the stopper gets really nasty. Finally on the extreme right by the sluice gate there is a near vertical drop which make an easy shoot but not for K2s and is dodgy for K1's, and probably too much for Canadians. Take care to avoid the columns of the bridge straight after.

The Jungle
Not really a feature as such. This is where the river narrows due to trees narrow to only allow around two boats through. Its a nightmare of trees, bends, shallows and snags for the unwary.

Templemills Weir
Templemills is an often underestimated this weir runs slightly right and is stony on the right but a fish chute straight down exists 1/3 of the way out from the left (around 25ft). . You can shoot left of this also but in high water the stopper is to be avoided. In very high water an immensely closed grippy stopper exists to the left of this chute.

Vanessa Weir
Vanessa's Weir this is extreme right facing, 8-9 foot tall thats very dry and stony on the left (avoid except in high water) with two faces split by two fish tanks in the middle. The right hand side is large and stony and runs into trees.

Vanessa can be shot into the chute which goes into the first tank and then into the second or straight out in high water or you can shoot down the face into the second tank and out (K2s be careful as the tank walls can impede you or break the nose). Alternatively to the left, but this is stony, and K2's take this sideways at an angle. Only shoot right in large water and be aware the exit is challenging due to trees.

Castletown Rapids
Castletown Rapids, just after Celbridge Town, is just a very slight drop with a few standing waves after. Castletown rapids are marked by some preliminary wavelet things and then onto the main event which is quite straightforward and nice, but watch out for trees.Grade 1 leading up to the main fall which is no more than 3 foot high with a decent Grade 2 rapid.

St Wolstans Weir
Below Castletown rapids about 600m up from SLCC. This weir only appears as the lake is drained and low. It can get up to 5' high or can be smaller depending on water levels. It is a gentle C shape facing slightly right and is below St Wolstans House. It is also known as the "Weir that never was". Always treat this with caution. It looks like nothing but it's stopper is very retentive.

Leixlip Lake
Leixlip Rapids, below the Leixlip dam, begins just after you go under the bridge. Salmon Leap Canoe Club is on your left. Its a small set of grade 1 to 2 rapids complicated by bridge abutments.

The Portage
At the end of Leixlip Lake is an ESB Dam, which has to be portaged. The path is on the river right. When getting back on avoid the bridge just in front of you. Below Leixleip dam are Leixlip rapids, a simple affair unless you are racing a K2 and get jammed for space.

The Sluice
The weir, near Lucan, is actually called Combers Weir and the Sluice formed when the old sluice gate collapsed leaving the entire contents of the Liffey plunging through a 12ft gap.

Its a right facing 7ft tall weir very overgrown with a chute at the extreme right end only in high water into an overgrown pool and narrow overgrown passage out. The main event is on the left where the river is squeezed through an increasingly narrow gap, followed by a large stopper and haystack wave.

Freestyle at the Sluice
The Sluice is a very popular feature for freestyle kayakers, the wave/hole that forms on the left, is ideal for doing all sorts of moves. It is possible to do both hole moves and wave moves on this dynamic feature. Though its must be said, because of the features unique qualities, it takes some getting used to before these moves can be pulled off with any sort of consistency.

Lucan Weir
There are three ways to take Lucan. The Chicken Chute on river right, the fish boxes in the middle, or the high drop on river left.

The weir is 9-10ft tall right facing weir in three sections. The "old weir" on the right hand end is a moderately slightly stony slide easily shot. The centre section contains three large fish tanks running parallel to the face of the main weir and they exit onto a slight ramp. The left hand end is occupied by a highly angled 7ft drop onto a s lightly angled 2ft ramp at the base. This can only really be shot sideways unless your craft is very small in length).

Beyond this is Lucan which is actually two weirs connected. It faces extreme right. On the left is the old weir (easy straight down shoot) is connected to the New Weir by three large fish tanks which are pretty straight forward and very bouncy. Below this is the very steep New Weir. Long and high (almost 9ft) best shot sideways especially for K2s.

Shackeltons Weir / Anna Liffey Weir
Anna Liffey Weir also known as Shacklestown Weir or Devils Mills Weir.. This is an 8 foot tall right facing weir of considerable length. Most of it is unshootable due to many trees on the weir and below. At the left hand end the weir opens up near the mill. A large chute runs semi parallel to the weir providing a simple shoot.

Wrens Nest
Wrens Nest Weir (also known as Devils Mills), near the Strawberry beds, 6ft to 7ft left facing V weir. Water conditions create a lot of changes here. The left hand side is easily shot but the stopper is retentive in very high water. The main shoot is through the centre of the V down a tongue.

To the far right before the mill race wall has a highly retentive stopper and a small broken rocky fish chute exists around 1/3 of the way from the V, and is generally not shootable. It is maybe 7ft tall and 2m wide. It often has logs and debris caught in it. A girl drowned 24th of June 2009 in it. She got sucked down it. Keep beginners away from it and from far right, with a good safety set up just in case. If a beginner was to capsize on far right above the weir they run the risk of being sucked down the shoot even at low water.

Palmerstown Weir
A large 11ft right facing V Weir with a steep upper section on either side, flattening to ramps just after Wildwater Kayak Club. Shooting down these faces is generally tricky, and the best route is down the centre into a series of nice haystack standing waves below the weir.

Chapelizod Weir
Chapelizod Weir is a 6ft to 7ft weir, shootable down a fish chute in the center or potentially on the stony face of the weir towards the right hand end. Below the weir is overgrown and has many trees.


Islandbridge Weir
The final weir on the Liffey is left facing, 11ft Islandbrdige weir and is located at TCD boat club. It is unshootable along much of its left hand end due to walkways and board barriers. Fish tanks exist (four or five at the centre left but again are unapproachable). The weir can be shot on the right hand end down a large easy face. This is a tidal Weir and is very substantial at around 11ft but stony and easy.

- The Liffey (especially the Sluice) has a reputation for Weils Disease/ Leptospirosis.
- Parking at the Sluice and other areas around Dublin have can be risky. Cars have been broken into in the past. Don't leave any valuables or bags in plain sight, lock them in the boot of your car.
- When using Strawberry Hall to park, ensure that you are not taking up all the customers spaces.

www.liffeyreleases.com: This site is the main indicator of when dam releases are, and how much water is being released.

- Like all rivers with weirs on them, flood levels can change a harmless weir into a killer.
- Some weirs and rapids have particular hazards, please refer to their individual descriptions.
- When trees fall in the Jungle it can block the river completely.