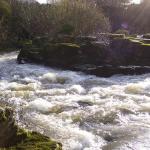 Take the N84 from Castlebar towards Partry. Swing a right at Partry following the signposts for Leenanne/Westport. The road forks shortly after this turn off. Keep to the left road and stay on this till you arrive at the village of Tourmackeady. The waterfall is located in the Tourmackeady estate and is well signposted.

The take out and put in are located in the Tourmackeady park estate. The waterfall is signposted from the car-park. Normally the barrier is closed on the road to the waterfall. So getting to the waterfall generally involves a 15 minute walk along the dirt road.

The first drop is, in my opinion the toughest and most technical. This is however blocked by a fallen tree at present and would take a bit of effort to remove. The drop itself is a bit messy but quite runnable. To the best of my knowledge this bit hasn't been run yet. But a bit of elbow grease and a bush-saw would sort that out.

The second drop is an 8-10ft angled drop. Due to a log jam on river left the only way to shoot this drop is river right or centre-right. Unfortunately river right also flows into a headwall, but with no serious consequences other than dented boats (so far). Centre-right is also a possibility but requires more water to run. This drop leads straight into the third and main drop.

The final drop is roughly 30ft high. The pool at the bottom varies in depth from around 6-8ft. However on river right, there is a rock and ledge about 1ft under the water. So going left is the only real option.

Technically this drop is not that difficult. However the consequences of a missed line would be unpleasant. I would imagine that higher levels would open up a few more options. Although this would give little time to correct your position from the second drop to the third drop. I would personally suggest that (a) someone removes tree on the first drop and (b) that if you run it you do so at a higher level than we ran it. At low levels there is a rib of rock that projects out from the river left side of the main drop. This makes boofing extremely difficult (at low levels) and generally buggers your line a little. What's even worse is that it's hard to spot the rib of rock till you're actually approaching it. Definitely don't run it in anything other than a creeker. Preferably with a lot of padding around your footplate.

Footnote:
Most of the tree debris on the drops seem now to have cleared out. Either due to someones hard work or winter floods. Most importantly the first drop is now unblocked. So Tourmackeady is now awaiting its first full descent.

None yet. Expect wide-eyed onlookers though. It's a popular spot for walks.

If it looks good to go, it probably is. Higher water is better though.