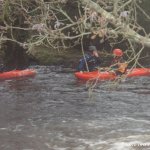 A nice Grade III-ish run through the Connemara country side.

The only public access route onto the Boluisce is by the small road/track down to the lake and then to paddle to the dam and on to the river.

Driving from Galway city (R336) going west, turn right going through Spiddal village. Continue up that road until you reach the entrance to the Spiddal caravan and camping park on the left hand side. Take the smaller road to the left.

After about 3 Km until you reach a bunch of buildings at a cross roads of sorts and a yard full of buses, continue driving straight on past this. You will then see a stone sign for "Leitir Peic". The turn off to the lake is the next left after this. (see photos and map)

Please, make sure that you are on the correct track. The locals have been very friendly and supportive of paddling in their area and we want to avoid disturbing them by trespassing. If in doubt knock on a door and ask a local for some advice.

Take out is at the mouth of the river at either bank, but the river-left back is the most accessible from the school car park.

At the Spar shop junction in the middle of the village, drive down past the church car park and under the van barrier, and park on the right beside the recycling banks. Follow footpath that leads to the mouth of the river.

Rodeo Hole
The hole is located at the gates of the dam at the Boluisce Lake. The river right gate is usually opened for the competition.

Long Start
The long start begins just below the rodeo hole on the Boluisce.

The Top Section
The top section begins just below the rodeo hole. This is a short section of grade III+ water. There are plenty of rocks and a bit of gradient. After a few hundred meters there is a right-left bend in the river and then it runs on straight. It's advisable to break out just beyond this bend to scout the waterfall.

Top Drop
The top drop is located 100m after a stone wall on river right and can vary between IV-V depending on the level. A large slab of rock splits the river and most of the flow goes right down a narrow chute/slide. A large hole can form at the base of this slide. The left line leads to a 6ft drop with a shallow landing which requires higher flows to run. It can best be inspected on river right and there is a large pool 100m downstream to collect stray boats/gear. This marks the end of the top section.

Start of the Bottom Section
Below the waterfall the bottom section begins. This is a fairly long section of Grade III water with plenty of rocks to navigate, a few trees but nothing really hairy. Short Start Small Wave When we say small, we mean very. This wave is normally just suitable for front surfing. Easiest line down this section is along river left. There's a good rock for rocksplatting just above the wave in the middle of the river.

S Bend
This is the first proper rapid on the short start. The S Bend is located approximately 300 metres from the small wave. As you approach the section, the river splits in two around a small island covered in trees. The river left side is overgrown so stick right. Straight after taking the right fork, the river bends sharply left. On the inside of this turn is a large eddy (good for having a look down). The river then goes right and you're looking down the S Bend itself. There's another small eddy on river left that gives a very good view down the S Bend. On lower water (roughly lower than 0.9m) the rocks of the S Bend are clearly visible so the best line is to go way out left, paddle around the top rock, way out right, paddle around the middle rock and back left a little bit to avoid the rock on the right at the bottom.

On higher water you can just plough straight down the middle of it looking out for the rock at the end. There is a hole in the centre of the river that you can plough straight through, but can cause problems with weaker paddlers(hit it with speed). Stick in the middle of the current after the S Bend and look out for a rock sticking up on the river left side.

Foot Bridge
After the S Bend , when you see the caravan park on the right, the river turns to the right, shortly after this is the foot bridge. It would be wise to get out and scout it to check the clearance and to make sure there's no debris. The foot bridge is a low concrete bridge crossing the river. The river narrows and drops down a little as it comes to and goes under the bridge. The bridge is low so you have to duck your head or scull under it.

Rock Garden.
The river splits in two just before the rock garden. The river left side goes down to a 4-6ft weir that's pretty overgrown so go right at the first split in teh river.

The Rock Garden is a short section covered in rocks (funnily enough). On low water it can be tricky for pinning but is generally okay if you can pick a half way decent line. The river splits a second time half way through the rock garden. Most people run the river right side at the second split. The left side is a nice line, less risk of pinning, but its a little harder to get left. The two forks join together at the bottom of the rock garden.

The Jungle
As the name suggests this is a section of the river that has trees on both banks as you pass trough the grounds of Spiddal House, just upstream of Spiddal. It starts with what seems to be a large man made stepping stone, which resembles a broken weir. This leads into a fun rapid with a large old stone bridge about half way down. Below this bridge there are two very low foot bridges, the "I-Beams". The safest route possible is to take the left channel before them. This should be quite easy as even in the biggest flows there is a large eddy on river left.

Poll Gorm
This is a meaty hole to give a last little buzz at the end of the river. When you reach the main road bridge in Spiddal village, paddle over to the river right bank. Take the furthest right stream through the trees.The river has been altered to build a fish counter weir 5m upstream of the feature. As of 28th of September 2011 works are still underway and the main flow is in a straight channel from the road bridge into Poll Gorm but Inland Fisheries Ireland have said the flow will be returned to river right through the counter and it should cause no obstruction. HOW THIS AFFECTS THE RAPID WE'LL HAVE TO SEE.The Spiddal pier is right in front of you and sometimes there's good surf if the swell is right.

River access can be an issue for both the short and the long start; when in doubt ask a local.

Check the gauge on the bridge in the Village. 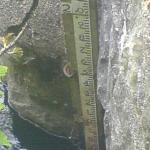 Boluisce gauge. Down stream of the bridge in Spiddal village.

This gauge is currently down. A new one will be up shortly.