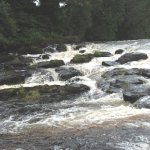 This is run very seldom by paddlers outside of Waterford, but its been done plenty of times. A very technical paddle, large boulder rapids, sections of gorge and some flat too, lots of scouting required before hand. Its almost possible to run from source to sea. Discovery Series 75.

North-East of Dungarvan. On the N25 from Dungarvan to Waterford, take the left for Carrick-on-Suir at Leamybrien (10km from Dungarvan). Your now on the R676, travel 4.6km before you cross over the River Mahon take a left at Mahon bridge (signposted for Mahon Falls).Follow the signposted road for Mahon Falls until you arrive at the Car park.

Many of Waterford Rivers its possible to break the run down into different sections. Put in just below Mahon falls given enough water. Walk from the car park along the long path to the base of Mahon Falls.

The Local committees walk through the forestry terminates in a large picnic area on the right of the road as you drive up the road. Pull in at the barbed wire fence climb over, walk straight and down the path to the river. Get on at Mahon Bridge on R676.

First take-out is immediately after the gorge there is a slip way down to the bank on river right. Walk out to the road from here.

Second take out could be in the Public Park in Kilmacthomas, follow the road from Mahon Bridge on R676 for Fews, take a right in Fews village after the church follow this road to the cross at Flavaghans Factory, take a right, meet the R677, Clonea Power road, another right and the Public Park is below the old stone railway bridge on the right.

The third get-out in Bunmahon, from the Public Park in Kilmacthomas go straight through the next junction pass St. Declans Community College, take the next right, followed by the second left. Follow the signposts for Bunmahon, (you pass Cooltubird West, home of the man who gave eye-split its name) its almost straight all the way. Through the village and you meet the sea at the sandy car park.

Ok where to start. Michael Reynolds is the only person as far as I know to have run the upper part of the river. This section is where the river runs off the top of the mountain into Mahon Falls. Its steep enough and scrapey and it is a long hike up the side of Mahon Falls with a creek boat. Mr. Reynolds is also the only person I know of to have run part of Mahon Falls. The very top drop of the water fall is some 55ft into a pool no deeper than 1.8m and you can see him do it in his DVD Tír Na nÓg.

The sane mans run begins as early as you want. With enough water you can start from the foot of the falls. From here its 2.8km of a grade 3-4, rocky, bouldery, tight and tree choked run to the start of the gorge. I have yet to see enough water up there to make it runnable. The gorge runs along side what you will notice as the over grown wooded section of road on the way up to Mahon falls. A local community group have put in paths through the forestry and its quiet simple to pull in anywhere along this road, jump into the forestry and walk the bank of the gorge.

The forestry section starts proper at a double drop ending in a pool, the first part of which is quiet narrow. After which there is a large river wide strainer, that even full floods have failed to shift. Get-out walk the bank past it and get-on again.

The next section is eye-split (see photos), a boulder garden with a runnable narrow channel river left. This leads into another smaller boulder garden before your on the stretch to PowerFalls (a past UL captain slipped & almost fell in while setting up rescue here see video). Beach yourself on the rocks river right and scramble up the gorge wall to scout this before running. Two little drops lead into a 6ft drop into a narrow slot, wed advise heading for river left on big drop and boofing. It usually flushes in a pool river right after.

Next up is bottle neck. Again scout well and pick a line before. Easiest option is run left at the top drop around a rock, drop down, then centre of middle drop and follow the shoulder on the left through the bottleneck. Gorge walls after are undercut at low levels but its reasonably easy to avoid.

Next drop is small 2ft a big rock is just below the water you wont see it but youll feel it! The next drop runs left and right of a rock, left channel is too narrow, run right but keep paddle in its not that much wider. Now your more or less done a few small rapids and gorge is over. The stretch to the main road is very overgrown and the out-put flue from the HydroElectric scheme is on this stretch be carefully.

From Mahon bridge on the R676 its possible to paddle to Kilmacthomas and then on to Bunmahon given enough water, the only excitement being a small weirs behind Flavaghans Factory and another in the Public Park in Kilmacthomas. The Reservoir at Ballyshonock, Portlaw now draws water from the Mahon between Kilmacthomas and Bunmahon, be carefully of the works there. The river enters the sea at the far end of the strand in Bunmahon, be carefully of any rips out to sea as a result.

Upper Mahon
Walk in from top car park until you see the river is flat and looks scrapy, their is a nice get in on a sharp meander on the river just before the gradient starts. While doing this river good foot wear and something covering the legs is advised as you will be in and out of your bat like a yoyo walking through bogs and heather.

The upper section from as far up as you walk up to the first tree line can be seen from pullins on the road on the drive up however much of the big stuff is hidden from view deep in a steep valley.

The river is constant with few eddies in medium water and hardly any in high, lots of drops appear out of nowhere as this river drops gradient very quickly and then eases off for a wee bit blind bends and very large boulders also help to hamper the view.

Their are too many drops to describe individually on this section and all need to be scouted every time on the river as the lines can change in a matter of moments depending on rain. Pinnings on this section are very likely with big hazards on most of the big drops.A pining on a drop when we first did the river resulted in spending an hour trying to free the boat the water also came up in this time with the bogs running like taps into the river.

From the tree line down to the gorge is very shallow and scouting is made hard by bushes and isn't worth the hassle the next section down is the gorge well worth the paddle.

The area around Mahon Falls and The Magic Road, is a very popular tourist spot, keep it clean, tidy and park neatly with consideration for buses. Locals have no problems what so ever with us, as long as we look after ourselves.

The Mahon HydroElectric Scheme now seems to be up in running. I've been away for 10 months and it wasn't working before I left but it is now. Judging from the The low scrapey level the river was at at lunch time today, the hydro seemed to have the same outflow as the flow between the intake and output. I don't know if this will be the standard amount take or if it will be more if the level is higher. I'll try find out.

There is no level gauge on this river. To check the level, wait for loads of rain (at least 2+hrs straight downpour). Where the R676 crosses over the Mahon there are two bridges, look over the right side of the bridge on the road signposted for Fews, a right off the main road. A concrete slab supporting the bridge extends out bellow it. If there is a nice constant flow of water covering all the way across this, it is running at a nice level. If you see there is any kind of foam pile here then the river is very high, there are no eddys for stopping, plenty of trees will be washed into the river and mistakes are very dangerous. Ive never seen it run at this level.

- Trees
- Banks in the gorge are extremely slippy!!
- More trees.

The Upper Section from waterfall down lots and lots of rocks boulders undercuts and other hazards to brighten up the day. Lots of deep bogs on the banks so caution should be taken while scouting.