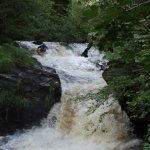 Much over rated and over graded riverm, that ends with 15ft water fall, that has a reportedly shallow pool at some levels

For the majority of its length the Erriff is predominately flat and unspectacular, unlike its surroundings. The only real bit of interest is in the last 0.8km. As the gradient picks up the river splits into two channels. In normal flows the river right channel is too scrapey to make it worth while. In higher flows it has a bit more potential.

Located 5km North East of Leenaun. From Westport follow the main road to Leenaun (N59). As you reach the mouth of the Killary Fjord take the R335 towards Delphi lodge and Assleagh Falls. The take out and put in for this section are located at the car-park on left hand side of the road. An alternate and longer start can be undertaken by taking the first right after the Glenacally River and starting from the concrete footbridge located there.

The take out is located were you can park for the shorter start, just downstream of the main falls.

There are also two waves on this river the first is a couple of km's upstream from the long start put in that was talked about in the description and the other is at that concrete bridge (the long start put in). the first wave works best in high water it becomes a small glassy wave really nice to surf really good if you have a faster boat not really going to be doing a the big air tricks on it but can be good for getting the basics down. the second wave is a bit nastier with a rock just under the water just behind it that can to dome damage to your head or helmet if it connects with your head so if your not the most adventuresome kayaker or don't like headbutting rocks might be best to give that one a miss. The top wave is a perfectly formed wave when it working with good eddy access and away from the fisheries board office that are near the the falls. It might not justify a trip out there but if you're in the area and its working then it definitely worth a go.

After the Long start put in the most often taken route is down the river left channel. Near the bottom of this channel one of the main obstacles lurks, a small cauldron that has a strong tow back even in low water. However the lead in and line down this is a simple left to right manoeuvre following the green tongue which would require effort to actually miss.

After this is a 200m paddle across a large pool takes you to Assleagh Falls and the main event. The lines down this 12ft drop are immediately obvious. They're all over the place. In high water taking the middle line from behind the island normally provides for some entertainment and the occasional thrashing The Irish Whitewater Guidebook states that the bottom is "cluttered and of varying depth". This may still be the case given that it's a river and that the bedrock at the bottom is unlikely to have disappeared. However gone are the days of monolith sized recreational kayaks which have a turning radius of a mile and require a plunge pool of fathomless depth to run. This drop has been run at almost every water level possible, in many different spots and none of us have ever hit a rock. Period

One or two people have actually hit rocks at the bottom of the main drop.This is perhaps more an indication of an inability to boof more so than anything else. Either way pencilling into the pool in some spots is perhaps not a good idea then. Boofing is though!

The Irish Whitewater Guide also grades this river as a V(d). In this day and age that grade is totally undeserving, even in high flows. Especially when compared to the likes of the Glenacally which feeds into the Erriff and receives the same grade. It's like comparing apples and donkeys.

Beyond the drop paddle a few hundred metres downstream and take out.

Mike Jones and Co. where stopped before from getting on the river, even though it wasn't the fishing season. This has happened to a number of other people too. According to the Fisheries Board it's forbidden to kayak this stretch of river, apparently. Either way access is a bit contentious.

Update:
I was recently talking to the fisheries board man for this area. He assured me that there was no issue with kayaker's running the river outside of the fishing season (between Oct-March).

The Erriff holds it water well so when everything else is starting to dry up it should still be running. Either way,the main falls are always good for a laugh even in low water