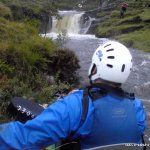 Continuous, technical and tight this is probably one of the best roadside 'buck for your bang' runs in the country.

Located 7km North West of Leenaun. From Westport follow the main road to Leenaun (N59). The Glenacally is situated on the North West side of Maumtrasna. It's intersects the main road (N59) and is signposted. There's a lay by beside the bridge for parking.

Another wee hike in so parking is the same for the take out and put in.

The Glenacally is the West's answer to the Glenmacnass in the East and the Flesk in the South-West. While unfortunately not as long a run as either, stroke for stroke it's probably as technical as both. As with most of the other runs in the area the Glenacally loses all it's gradient over a relatively short distance and reacts to rainfall rapidly.

All of the rapids are easily inspectable, however once on the river there are one or two drops that would be difficult to portage when on the water. The first main drop is a 15ft (ish) waterfall.The lead in is a little rough.The fall itself looks grand, but once you run it your committed to running the next drop. The next drop actually looks fairly innocuous, but give it a good look before deciding whether or not to run it.The rapid consists of a 5ft drop and thats pretty much it. However the difficultly in this rapid lie's in it's narrowness and the towback. The towback in low water is about a boat length. You only get about six strokes above this drop to power through it. And once you drop in there is no room for paddle strokes. Its that tight. In addition to which the side walls are probably to smooth to grab hold of anything to pull yourself out. On top of all this the towback powers into a small cave behind the falls. Now this isn't exactly a narly drop or anything and is well runnable, if you have enough people on rescue for the whole section from the waterfall to that drop. Myself and a mate opted out of running this section in low water simply because we thought that two people was two to few to protect that particular section.

The next drop of note after this is a mess. I tip my hat to the man who runs it on river left.Lots of pointy rocks.River right works. Better in medium/higher water we reckon.Low water is still a bit mank.

After this the next drop down is a two tier teacup drop. This looks like a lovely drop.But looks can be deceptive. Running this drop requires either making an abrupt 90 degree turn or catching the eddy directly above it. Either way landing on target can be a difficult. Both myself and Alan Judge managed to pin in the first teacup in exactly the same spot. That being said its a very easy pin to get rescue from, in low water at least. Based on our experiences we reckon that there is just inches between getting this right and pinning. Perhaps in higher water it becomes a little easier.

Beyond this the rapids are a lot mellower although there are still plenty of pin potentials and narrow spots. In higher flows this run would become quite difficult and require very proactive paddling.

Footnote:
I changed the grade on this from a V to between a III and a V. Thats because the section above the hardest drops is a fairly mellow 3/4 run.If it had water it would make a lovely run. If you planning on doing the gorge section of this run bring at least 4 paddlers,just to be safe. The more rescue the better.And elbow pads would be a good idea.

None that I know off. The lay-by for parking would not hold more than a few cars so the Humm-vee might be a bad idea.

Runs at the same levels as the Seanafearrchain and the Shranalong. If it's been raining for a few hours it's worth checking out. I reckon that a high side of medium level would be about the best level as it should pad out some of the drops and cover up undercuts.

Lots of potential for pinning, broaching and thrashings in general. Good rescue setups would be a good idea. A creekboat and some elbow pads wouldn't go amiss either.