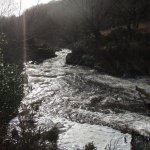 The sporadic frequency and relatively short duration of flooding, means it is normally not possible to plan an trip to this river, hence any decision to paddle the river is generally taken at short notice by groups of kayakers, who may happen to be in the area.

The headwaters of the River Gaddagh form in Lochs Callii and Gabhracht on the north side of the Macgillycuddy Reek mountain range. The river flows through Hags Glen acquiring further tributaries, down the Carrauntoohil Valley, before joining the River Leaune, finally discharging into the sea at Killorglin.

The put is above Hags Glen, above a series of waterfalls.

Adjacent to the Gaddagh Bridge on the Glencar Road.

After heavy rain flood periods may only last a few hours, but during that time the river levels will rise dramatically in some instances by several metres. On such occasions, the river transforms into a high volume, fast flowing continuous river, with significant levels of white water, closely resembling Alpine river conditions.

The terrain through which the river passes, varies from open gorse bogs for the first 1.5 km to heavily wooded sections lining the riverbanks below Cronins Yard (see the map). Cronins Yard is a base point for hill walkers and climbers proceeding up Carrauntuohil providing parking, showers and café facilities on a cul de sac, some 5 km from the main Fossa/Glencar Road. Kayakers also use it as it is adjacent to the Gaddagh River which flows some 500 metres to the west.

The top section
Above the waterfalls or "drops" in Hags Glen is considered as potentially Grade 5.
The middle section
Below the drops to a point below Cronins Yard is regarded generally as Grade 4.
The final wooded section
The final part of the course extends from Cronins Yard to the Gaddagh Bridge is considered as a Grade 3. By this stage the river has widened, its gradient has reduced and the intensity of the flow reduced.

The Gaddagh originates at a height of some 450 metres and maintains a steep gradient for the majority of its transit through Hags Glen. Over time in these upper sections, it has cut a series of terraces through the mountain, producing a number of waterfalls. Making its an attractive prospect for kayaking.

The river requires continuous heavy rain is required, generally supplied by a series of low pressure, slow moving weather fronts approaching from the west. The height and profile of the mountains causes rainfall enhancement, due to orographic uplift, saturating the slopes and causing the Gaddagh river levels to rise rapidly.

During flood periods, the river levels, profile, and direction may change significantly as large amounts of debris and boulders are moved along the riverbed, riverbanks are overflowed, adjacent trees can be uprooted and washed downstream and new channels formed in the rivers path.

Christmas 2007 Incedent
"A female student got into difficulty while kayaking on the River Gaddagh, near Beaufort, Co. Kerry. Kayak overturned and became wedged under a sunken tree branch. She later died in hospital."

On a river of this nature bank erosion combined with storm conditions could mean that the multiple trees down scenario may occur again.

Parts of this guide have been take from a Marine Casualty Investigation Board report. The MCIB have kindly agreed to let IWW to republish parts of the report.

The Report can be found on the MCIB website www.mcib.ie and on IWW