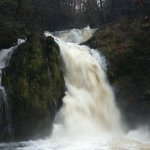 The Annacloy river rises in the Dromara Hills and flows into Strangford Lough. Excellent paddling is had between Mason's bridge and Kilmore with several weirs and a sustained 100 metre grade III section which can also be "park-and-played" from Raleagh bridge. Between Kilmore and Annacloy the river is quieter although there are still a couple of weirs.

The Annacloy is located in County Down between Crossgar and Downpatrick.

The get in is at Masons Bridge (GR: 406-513) which can be reached by turning off the main road at the church in Annacloy village. Continue along this long straight road until you reach the bridge.

The take out is located at Kilmore (GR: 448-509) about 50 metres downstream from the bridge is a water monitoring station with steps to the water and a water gauge. There is parking here for two cars, other cars can be parked near the houses on the opposite side of the bridge.

The river can be ran further down with a couple more weirs and rapid sections finally getting out at Annacloy Village (GR: 448-483) by the bridge. There is a large carpark beside the bridge.

Have a look at the water gauge in Kilmore- It can be ran as low as 1 metre, any lower and your in for a scraping!

Shortly after the get in you will reach a diagonal man made weir with a wall diagonally running down the middle. This weir can be ran anywhere or the top of the wall can be followed like a chute in lower water. Caution should be taken when playing in this hole as a wall sticks directly downsteam from the bottom of the long diagonal wall. This may not be visible in higher water.

Watch for a large house on the right hand bank with its wall directly into the river. This is the last large eddy before the rapids and is a good place to regroup before running them. The main rapid section comes shortly after this as the river flows faster round a series of bends.

From here the eddies become much smaller (one/two boats max) and the river much faster. It is highly advised to scout this section from Raleagh Bridge (GR: 410-521) before running it as almost always contains downed trees which may not be viable until your almost on them.

The Raleagh Bridge rapids are best ran 'french style' dropping from eddy to eddy, although they can also be shot straight though on the left hand side for less experienced paddlers.

If you in the area for only a short while this section can be ran 'park-and-play' style by walking up the gravel lane on river left and getting back in at the top of the rapids again.

After the Raleagh bridge the grade eases back to II and after a while reaches another diagonal weir. This weir can be decieving when scouted from the water as the bottom two foot of it -just out of sight- is actually much steeper than the rest of it. Luckily there is a deeper channel on far river right which avoids this hazard and is the best line to take.

There is another rapid section down through an old mill but it is not hard and soon you will find the river flattening out. There is a newly built and very dangerous weir which is well signposted. This should be portaged on the left hand side where a track leads down to a ford allowing easy access.

From here down there is only one weir, another diagonal one, this time with a wide slot in the middle which is also the best line. Caution must be taken after this section as the river gets quite overgrown, especially in high flow.

Once you pass this section you'll reach Kilmore brdige and the getout on the left about 50 metres downsteam.

You can run on to Annacloy Village itself, with another weir and short rapid section, and lots of flat water in between.

Kilmore GR: 448-509 about 50 metres downsteam of the bridge on river right is a water monitoring station (green hut) with a river level gauge beside it.

It's runnable at 1 metre.

One dangerous weir about half way along (well signposted from the river) should be portaged.

This river is very prone to fallen tree's, particularly in the Raleagh bridge section.