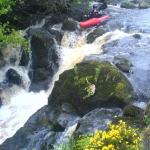 Awesome creek on the doorstep of Dublin. The Dargle is a short but classic creek run on the outskirts of Dublin. Needs plenty of rain, but comes up and down very quick. Be careful getting on it when hammering rain as it rises very quickly. 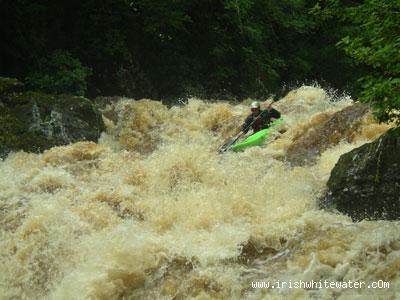 Turn off the N11 near Bray. Follow signs for Enniskerry. Takeout bridge is 150m from N11.

Take the first left after the take out bridge. Follow the road up the river. Take a left at the T junction. The road snakes down to a narrow bridge. Park on the right in the lay-by by the gates.

The take out bridge is at the Dargle Bridge, beside the N11 at the Enniskerry turn off the N11 near Bray.

In low water the Dargle is a bony, technical class 4, with lots of pinning potential. For this reason it is not an ideal first introduction to steeper whitewater, try the Upper Liffey or Clare Glens instead.

In medium flow, it is a superb class 4-5 run, steep and technical, but with no unpleasant suprises. In very high water the Dargle is the one of the most challenging sections of water in Ireland, continuous class 5 with some monstrous holes. At this level it is a very serious undertaking, as rescue would be very difficult .

After putting in the river is flat for around 1.5 kilometres, allowing for a warm up. When the river picks up, eddy out river right after 200 metres to inspect the Main Falls. The eddy is pretty tight, and people have been known to miss it, The Main Falls is a technical 3 m + fall. In low water boof on river right. The landing is very shallow, people have been known to break ankles by melting it. In high water, the main falls becomes a ramp that can be run down the middle 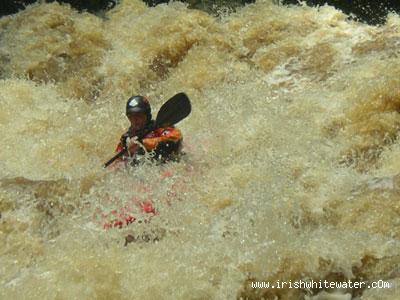 In high water, the eddy river right is washed out and the section needs to be inspected from several hundred metres back on river left. Be aware that the hole below the Main Falls becomes very retentive at this level. 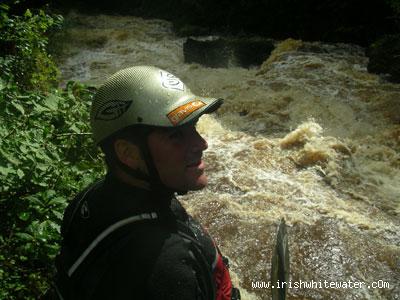 Below the Main Falls, the river picks up, continuous, read and run Class 4 , for a few hundred metres. Watch out in high water when the river gorges up again, as there are some very sticky holes (usually run on river right). Usually though, the rest of the river is read and run class 4. Watch put for trees, especially after flooding.


Then its a quick blast to the finish, wishing the river was a bit longer, or for a second run.

This is a popular salmon river, treat the fishermen with respect.

In the past we used a block system counting the concrete blocks on the takeout bridge, but as the river bottom changed, this system no longer works as well.

Main Falls- in low water it has a shallow, rocky landing. Don't forget to boof. Watch out for trees, especially after flooding. Treat this river with respect.

Its probably a little known fact that the river claimed the life of a canoeist, many, many years ago back in the 1980's. He died attempting the river in a flood and stupidly did this alone and never made it out the other end. Also, some years ago two women died in a flood when they attempted to cross the river on their horses. In Hurricane Charlie in 1986 a number of bridges were washed away on this river after a man made dam adjacent to the waterfall was over topped and drained the man made lakes.